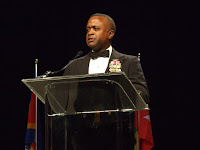 Rear Admiral Arthur Johnson and I went to high school together at Wiesbaden American High School (General H.H. "Hap" Arnold). We were both AFJROTC cadet officers in the GR 71st AFJROTC Squadron and were on the Varsity wrestling team together. I graduated in 1974, Artie graduated in 1975. I enlisted in the Navy in 1975. He entered the USNA. He was smarter than I was; faster; stronger and much better looking. We were Lieutenants together at Barbers Point in Hawaii in the 1980s flying with different VP squadrons in COMPATWING2. In the early 2000s I ran into him at the Pentagon and he was an Admiral; I was a Captain. In all those years I never looked at him as a Black man and I don't think he ever really identified himself that way.

He's a man. Plain and simple. He's a great husband to his wife, father to his children and example for all of us. When I think of what diversity ought to be, I think of him. Not because he is Black, but in spite of it. Brains, brawn, good looks, athleticism, great sense of humor and so much more. He brings a higher level of intellect to every discussion and a superior sense of his own self worth as a Naval officer and person. The Navy has turned to him often to be the "Black Example". For me, I just see him as an example for all of us. For me, he is someone worth following.
Posted by Mike Lambert at 4:03 AM