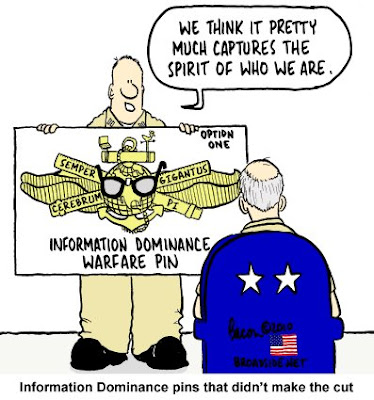 Check out more of Captain Jeff Bacon (USN, retired) over at BROADSIDE.

You may not know it, but there is a battle going on within the Navy. At stake is nothing less than cerebral dominance.

Back in the old days, like about a year ago, the Navy was comprised of a lot of specialized communities. Intelligence, Cryptology, Oceanography, Space, and Information Warfare communities all enjoyed their own empires and their own hierarchies. They coexisted and tolerated the other groups with similar “information intensive skills” (CNO-speak for “people with big brains”), as long as they stayed in their own lanes and didn’t challenge the respective communities’ unique skills. But in October of last year the Navy – if for no other reason than to enjoy the spectacle – combined them all into the Information Dominance Corps.

They even got their own warfare pin.

Imagine if you were Valedictorian of your high school class, and then found out that four other schools were joining yours just before graduation – each bringing its own Valedictorian. Who would give the speech? Who would be declared smartest of the smart?

It’s not like the wrestling teams would have that problem. They would just have an all out brawl to see which wrestler would be number one.

But the thinkers don’t work like that. I know what makes them tick because I was once one of them (I got in on a technicality).

The new InfoDoms will be more cunning. More coy.

They’ll wait for the right moment to pounce, and when that moment comes they will strike with polite but brutal efficiency. Most likely this will happen in one of the scientific conferences they attend – the preferred arenas for hand-to-hand (or cerebrum-to-cerebrum) battle. (“Excuse me, but your premise is incorrect. One might suspect that you either don’t understand the principles supporting my argument, or you simply failed to do your homework. Didn’t I see you hanging out with some aviators last night…in a bar?” (audible gasp from the audience).) This is the Information Dominance Corps equivalent of a right cross to the chin.
To make matters more complicated, each community has to grit its teeth and learn a little something about the others. Weather guys have to learn what cryptologists do (good luck with that). Intel guys have to learn about Information Warfare, and so on. It’s like the scene out of “Remember the Titans” when everyone had to learn something about each of the other players.

It will be mayhem.

Oh sure, on the surface they will put on a brave face and do their best to work together. But inside, their guts will be shredding. They will all know – KNOW – that theirs is the dominant community. E Pluribus Unum means “Out of many, one.” The Information Dominance Corps’ slogan would roughly translate to, “Out of many, one is better than the others.”

The good news is that these people are smart, and I imagine they’ll work it all out in the end. And who knows? Maybe the new corps will emerge stronger and more capable because they all speak the same language. Maybe the pecking order will naturally just work itself out.

And if it doesn’t?

There is always the all out brawl.

Okay Captain, I was trying to figure out where you were going with this, so I read the entire thing - nice touch, weaving the human behavior model into your thoughts.
I'm not sure if I like the way this is going, however, with shrinking dollars and expensive manpower, it appears that the best approach is to accept the change and start figuring out solutions as you encounter the alligator in the road.

Mike:
possibly you funniest post ever. It made me laugh on a day when I needed it!

This is insensitive and mean-spirited. Standard fare for this blog.

Thanks for the warning. I will make sure to brush up on the kickboxing... just in case. Although perhaps an ultimate IDC version of Cranium might do the trick.

Well if you think the Navy revolves around "Information Dominance Corps" you are as delusional as everyone else in the Navy that stick only to their individual “rice bowls.” The whole DoD needs to be streamlined for the good of the country. We need to get back to our “grass roots” so to speak. Cut the Flag and SES ranks in half…Roll down all the shore Capt billets to Commanders etc. etc. If the SECDEF and CNO doesn’t make the hard choices the Navy will go the way of Imperial Russian Navy. Additionally, for the "Information Dominance Corps” to think they have the market cornered in the “Brains Department,” you may want to reevaluate what the Navy does…

I'm a CTN2 that wants a pin, just so the "salty sailors" (mostly riders that no one really liked anyways), will stop telling me "You need a pin." But this whole thing just needs to die. I'll trade that shiny chunk of medal for a technical pay. I know 4 different (programming) languages that I use on a daily basis. CTNs need a technical pay, or the Navy is going to have to pay to train new ones every 6 years because equivalent civilian/contractor jobs pay 3-4x as much on average. I love my country, but simple math wins every single time.

CTN2...I hear ya!! The problem is that Officers get paid WAY too much money for what they do (lead?!) as compared to the technicians. The payscale in the Navy is nowhere close to civilian pay in the computer industry...The difference is that a civilian doesn't have to go to sea, IA, GSA, remote oversea locations, stand 24 hour duty, etc etc. So thats worth the pay difference between civilians right? NOT!

So what exactly is the difference between a newly minted Ensign and a CTN2? Well the Ensign has a 4 yr degree and the CTN2 has about 5 yrs experience and equal amount of education as the Ensign minus the English 101&102 and electives for a BS from University of Anywhere.

OHHHH But wait you make E6 at your 6 year point and still have more experience and leadership than the Ensign who just put on O2 automatically for just showing up?

You say you are a hard-charger and make CPO at 9 years and are now considered the Technical Expert!? Well remember the Ensign? He is now a LT at six years!!

In short the Enlisted have far more experience than that brand new Ensign...and do we get paid for this experience? No! The Enlisted pay scale never equals that of the Officer pay scale even though the lines are blurred between the two. What is the difference? That english 101 & 102 course the Ensign took while back at University of Nowhere. Is it fair? HELL NO!!

Just remember that the next time some inexperienced O1 or O2 looks down their nose at you because they have a "degree." My suggestion...reach for the stars and never look back...