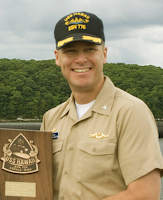 The commanding officer of the Trident Training Facility in Bangor, Washington, Captain David A. Solms (picture at left was taken while he was CO of USS HAWAII), was fired by Capt. Kenneth Swan, commanding officer of Submarine Learning Center in Groton, Connecticut. Captain Solms had been in command for 1 year.

The Navy said the firing was based on “inappropriate personal behavior” that led to a loss of confidence in Captain Solms’ ability to command. The Navy would not characterize the nature of the behavior other than to state that it was "inappropriate".

ACCORDING TO THE NAVY PUBLIC AFFAIRS OFFICE, THE NAVY HAS MORE THAN 1500 COMMANDING OFFICERS WHO SERVE WITH HONOR, COURAGE AND COMMITMENT THROUGHOUT THEIR TOURS AS COMMANDING OFFICER. THESE FEW COs WHO ARE FIRED REPRESENT A VERY SMALL PERCENTAGE OF THE CO POPULATION. THE CNO HAS SAID THAT THESE "BEHAVIOR" FIRINGS ARE PARTICULARLY TROUBLING.

From CNN: "Though 14 may seem a high number of commanders to be fired within a nine-month period", Lieutenant Justin Cole (Navy spokesman) said, "the Navy dismisses an average of 15 commanders each year."

Captain Solms is a native of Colorado Springs, Colorado. He graduated from the University of Colorado in May 1985, earning a Bachelor of Science degree in Aerospace Engineering and was commissioned through the NROTC program.

After completing nuclear power and basic submarine training in October 1986, Captain Solms reported to Pre-commissioning Unit Helena (SSN 725) undergoing construction at Electric Boat Shipyard in Groton, Connecticut. During this tour, he served in a variety of division officer assignments, completed a homeport shift and a Northern Pacific deployment and earned his submarine gold dolphins.

In July 1989, he was assigned to Marquette University Naval Reserve Officer Training Corps Unit, where he earned a Master of Science degree in Electrical Engineering/Computer Science.

Following submarine officer advanced training, Captain Solms reported in June 1992 as Engineer Officer of the USS West Virginia (SSBN 736)(Gold) in Kings Bay, Georgia. From November 1994 to November 1996, he served as the Submarine Liaison Officer for COMCRUDESGRU ONE in San Diego, California. In December 1996, Captain Solms was assigned to the COMSUBPAC Representative at Puget Sound Naval Shipyard. He then served as Executive Officer aboard USS Ohio (SSBN 726)(Blue), based in Bangor, Washington from May 1998 to August 2000.

After completing Prospective Commanding Officer training in March 2001, Captain Solms reported to Submarine Squadron Seventeen for assignment as Deputy Commander for Engineering Readiness. In February 2002, he relieved as the Commanding Officer, USS Alaska (SSBN 732)(Gold). Under his command, the ship was certified as the first Trident II D5 Backfit strategic platform, completed three deterrent patrols, and was awarded the Battle Efficiency “E” for 2004 from COMSUBRON 19.

Captain Solms assumed command of USS Hawaii (SSN 776) in May 2005. During his tour, the ship was christened, delivered to the Navy, commissioned, and completed significant test, evaluation and certification events. In August 2007, Captain Solms reported to the Commander Submarine Forces in Norfolk, where he served as the Director of Strategic Operations until August 2009.

There is nothing in the command screening process that could have prevented this officer from getting to where he is today.

Good job snagging the bio before his web page got taken down!

I served with Dave as a JO. Nothing surprising in this story. Just the length of time it took for the Navy to figure him out.

I served with him when he was skipper of USS Hawaii. Steller CO, outstanding leader. The best CO I have served with.

"...Just the length of time it took for the Navy to figure him out."

For those of use who don't know him, what needed to be figured out, and why is it that the Navy, as an institution, appears to be blamed instead of previous leaders?

I agree with the two previous anonymous posters above. Superb Skipper, courageous at sea in performing the undersea mission. Problems seem to be limited to his time ashore.

Unless you've had command at sea or major command ashore, you're not in a position to comment on the performance of Captain Solms. He is a superb Navy leader. The Groton CO may be trying to cover himself by firing Dave. It is nearly impossible to defend yourself against "loss of confidence" accusations since they are nearly 100% subjective. I would put Dave up against Ken any day of the week in an engagement at sea. Dave may have made a mistake in judgment. He's man enough to get over it and move on. As much as I love the Navy, it is not the only employer. Dave has much to offer any employer and he will depart with his integrity intact. Many depart the Navy on their own terms but leave without their integrity. Not the case for Dave.

I wonder, as a percentage, how many Army Captains have been "relieved" this calendar year? Would be an interesting comparison.

It is a shame that the Navy takes sooo long to groom officers for "real" commands and then they fail at the apex of their careers. Maybe if the Navy gave "real" commands to more junior officers ie O-2's, O-3's, the cream would rise to the top.

A follow on to the previous comments about Army Leadership..
http://www.oregonlive.com/opinion/index.ssf/2010/06/army_leadership_lapse_in_culli.html

@ CO@Sea: I find it highly pompous for you to state: "Unless you've had command at sea or major command ashore, you're not in a position to comment on the performance..."
Any sailor worth their salt is in a very good position to comment on the performance of their superiors. As a matter of fact, I've been called upon officially (but off the record) to do just such a thing. John

FORMERSCPO: I served with Solms when he was Engineer on 736(G). A leader of, and good to, his men. Unflappable in tough situations, and an expert shooter/hunter/killer!! Thats how I remember him. We are all human, we all make mistakes. The zero tolerance mentality often breeds lots of judgement from the elite bubbleheads - we eat our young and our old. This was his 3rd command - clearly he understood command - but made a bad decision this time. So be it. Move out and move on.

@ CO@Sea "The Navy would not characterize the nature of the behavior other than to state that it was "inappropriate."

I don't care how much of a "superb Navy leader" that you think CAPT Solm was...it sounds like he has a flaw in his "superb" leadership? Unless you have a different standard than the rest of us?

Usually when "inappropriate" is tagged for relief of a CO it means he couldn't keep his pants up. Is this the type of "superb leader" you want to lead the sons and daughters of America?

In response to CO@SEA above. A few points here.
1. Having served under good and bad CO's, juniors have the right to comment.
2. This is the United States of America and we are guaranteed that right.
3. I don't care how good you are, if you have a charactor flaw that is egregious, you must go. Not talking Zero Defect here - words have meaning, that's why I used "egregious."
4. Although, I've never had the priviledge of command, since my retirement from Naval Service after nearly 30 years in uniform, my covenental responsibilities in leadership within the civilian community have reenforced the those things concerning integrity and loyalty. In one of my current leadership positions in the community, I can be asked to step down with no explanation (this isn't in my job, it's a community position).
5. As a tax payer and as the parent and uncle of youngsters in Uniform, I expect unreproachable conduct from those in command, whether as a Junior Officer or a Senior Officer. My kids deserve it.
-Brian Ashpole

"Unless you've had command at sea or major command ashore, you're not in a position to comment on the performance of Captain Solms."

I've done both. But I agree with a later commenter who says you don't need this experience to have a well calibrated sense of leadership. From either perspective, Navy command has its standards and COs know what they are. Seldom does a CO detached for cause say he or she didn't know the conduct in question was 'inappropriate' ... and if this is said, it's a lie.

Blog traffic elsewhere on this incident hints that it might involve DADT. If so, it illustrates yet again how pernicious and wrong that law is. This is a guy with a great reputation and deep experience that's being deep-sixed. If there's no fraternization issue here and it doesn't involve congress with farm animals, who gives a shit about his private life.

Zero tolerance my ass! If my skipper dropped his pants or pulled up her skirt for another member of my wardroom or with any subordinate, I would drop the dime on them in a heartbeat. I’d think less of any officer who wouldn’t. How could you ever look your sailors in the face again if you condoned "inappropriate behavior"?

In my opinion this isn’t a rash move by leadership to remove these COs based on the current tide of being politically correct, no this is an epidemic that has been fostered by the absence of personal ethics and leadership principles that Navy has assumed was being instilled. Not one of the “inappropriate behaviors” was an “Ah shit, I didn’t know I wasn’t supposed to do that!” No it was poor judgment for which each and every one of them knew was cause for relief .

@Rubber Ducky You said: "Blog traffic elsewhere on this incident hints that it might involve DADT.If so, it illustrates yet again how pernicious and wrong that law is."

The CAPT is married, so if it is a DADT incident he F-ed up on serveral levels.

Rubber Duck wasn't suggesting that the Captain was gay. That wasn't the context of the DADT comment. In the current PC environment, the perceived improper reaction by the CO (Solms) to a DADT situation can warrant his/her relief (firing).