We can argue about whether Steven Daugherty was a hero or not. We can't argue about his patriotism. There is no doubting that.
Obituary:  CTT1 (SW) Steven Phillip Daugherty, USN, 28, passed away July 6, 2007, on duty in Baghdad, Iraq. He was born May 16, 1979, in Apple Valley. Besides his love for the Navy, he enjoyed playing his guitar and spending time with family and friends. He is survived by his parents, Thomas and Lydia Daugherty of Barstow; a son, Steven P. Daugherty Jr. of Tacoma, Washington; two brothers, Robert Daugherty of Omaha, Nebraska, and Richard Daugherty of Colorado Springs, Colorado; a sister, Kristine Daugherty of Killeen, Texas; and his grandmother, Pearl Watkins of Yermo. A graveside service with full military honors was conducted in Arlington National Cemetery Tuesday, July 24, 2007, at 10 a.m.

NORCO, Calif. (NNS) -- The Navy dedicated the latest addition to the nation's premiere Joint Warfare Assessment Laboratory at the Naval Surface Warfare Center (NSWC) Corona May 28 at a ceremony to honor a Sailor killed by an improvised explosive device.

"The Daugherty Memorial Assessment Center nearly doubles Corona's secure analysis and assessment area and significantly enhances our ability to do collaborative performance assessment," said NSWC Corona Commanding Officer Capt. Rob Shafer to the overflow crowd of more than 450 attendees. "It will stand as an ever-present reminder of Steven - and to every Sailor, Soldier, Airman, and Marine who has given their life in defense of this country. This dedication commemorates his sacrifice and recognizes the groundbreaking work NSWC Corona is doing to help combat the threat of IEDs against our armed forces."

Daugherty's parents, Tom and Lydia, attended the dedication ceremony with one of their sons, Air Force Staff Sgt. Richard Daugherty. Each of the four Daugherty children has served in the armed forces, and two are currently in the air force.

"Steven was proud to serve his country," said his mother Lydia. "He took pride in his work and always did the best he could."

Daugherty recently received one of the nation's top awards in the intelligence community for his bravery and contribution to cryptology.

"It was an honor for the Intelligence Community to bestow one of its highest awards on Steven – the National Intelligence Medal for Valor – in deep appreciation for his example of courage," said Dennis C. Blair, director of National Intelligence, about the dedication. "It is entirely fitting that the Department of the Navy has honored the memory of Cryptologi[c] Technician Tactical First Class (SW) Steven P. Daugherty by giving his name to its new Assessment Center at Naval Surface Warfare Center, Corona Division."

"To the elite Corona engineers, I say this: As you go about your good work supporting the men and women in uniform, may this building serve as an ever-present reminder, a monument to heroes, named after Steven Daugherty, our hero," said Senior Executive Dr. William Luebke, NSWC Corona's incoming technical director. "Never forget how important the work we do here is for them fighting over there. For truth in performance means dominance on the battlefield. It is our mission, it is our purpose, it is our calling."

In addition to supporting counter-IED efforts, the Daugherty Memorial Assessment Center greatly enhances NSWC Corona's ability to support key national missions. With it, NSWC Corona can provide Strike Group interoperability assessment needed to certify ships for deployment; provide critical flight analysis for all Navy surface missile systems; and provide performance assessment of Aegis and Aegis Ballistic Missile Defense ships throughout their entire lifecycle. NSWC Corona can also centralize, process, and distribute the Navy's combat and weapon system data on one of the largest classified networks in the Department of Defense.

Following the dedication, the Daugherty family toured the facility and learned how Corona analysts are helping defeat the threat that killed their son and brother.

"He would have been very humbled by it all," Daugherty's mother said about the building dedication. "He would have said he was just doing his job."

Naval Surface Warfare Center Corona is the Navy's only independent assessment agent and is responsible for gauging the warfighting capability of ships and aircraft, analyzing missile defense systems, and assessing the adequacy of Navy personnel training. The base is home to three premiere national laboratories and assessment centers, the Joint Warfare Assessment Lab, the Measurement Science and Technology Lab, and the Daugherty Memorial Assessment Center, which are instrumental in fulfilling NSWC Corona's mission and supporting the nation's armed forces.
Posted by Mike Lambert at 7:11 AM 2 comments: 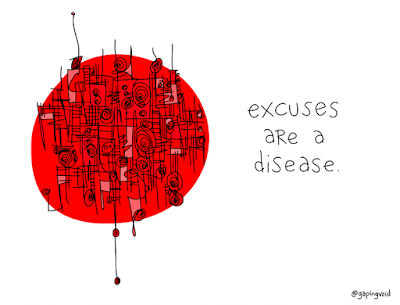 You can enjoy more of Gaping Void and Hugh MacLeod HERE.