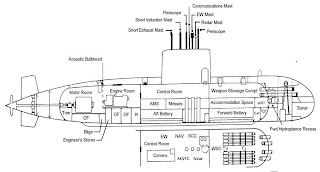 With the introduction of the new VICTORIA-class submarines into naval service in the late 1990’s – and with them living conditions more conducive to mixed gender crews – Canada joined several other allied nations in fully integrating women into service in the submarine environment. Although only a handful of women currently serve aboard Canada’s operational submarines, they have been seamlessly integrated into the environment with few problems.

No attempts have been made to segregate the genders, and no special provision has been made for bunking or shower facilities.

Reproductive issues have been addressed, including potential risks to the mother and fetus should a female submariner become pregnant, as well as other gynecological concerns. In addition, the psychological impact of mixed gender crewing has been explored using space-analogous operations. Advantages and disadvantages of mixed gender crews have been identified, and recommendations made to mitigate any potential negative impact on operations.

The full report is HERE.

Today there are four female submariners serving aboard VICTORIA-class submarines and others undergoing training; all are non-commissioned members (NCMs). Although one female Maritime Officer did complete the Basic Submarine Qualification course, she did not complete the sea phase of training in order to receive her dolphins.

Interviews with female submariners about their experience serving in submarines reveals common themes: all are mature, experienced sailors who simply wish to be considered one of the crew, and do not want to be singled out because they are women. They are very professional and dedicated to their careers, and work hard to gain the respect of their male peers for their skills as submariners, not specifically as female submariners.
Posted by Mike Lambert at 4:25 AM

Form over function, sounds good to me. Let's see how much money we can waste to convert our specifically designed battle hardened submarines to support a social experiment during these fiscally tough times. Sounds a lot like task force uniform. How many millions of dollars were wasted so that we could look cooler???

From a military industrial complex view, money spent on the military is never wasted. This is a fundamental problem with our military and the industry surrounding it. The money that will be spent to put a handful of female sailors on a sub, will probably cover the pay and benefits of the entire ship's crew's military careers. I'm sure the same people that are lobbying for women to get onto subs are the same businesses that will be "updating" them when the policies get changed.