A profession that values integrity and moral courage 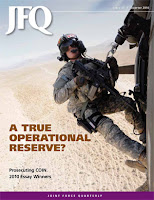 A few excerpts from a thought-provoking article in Joint Forces Quarterly.
Breaking Ranks: Dissent and the Military Professional

... a profession that values integrity and moral courage cannot at the same time justify a deceptive approach to dissent. By taking an open stand, the military professional displays the courage of his convictions but also implicitly accepts personal consequences, whether he is right or wrong. His stand may persuade the issuer of the order to reconsider or it may draw the attention of the legislature to the issue.

On the other hand, it may be purely symbolic—and have no effect on the decision. Regardless, he has exercised his moral autonomy and taken the consequences. He may, after all, have been wrong in his predictions, and this point is key because the military professional, however well placed and intelligent, is always fallible. Allowing him moral autonomy to dissent benefits the process of policy execution overall; sanctioning the practice of "slow-rolling" orders deemed to be immoral ultimately sabotages this process.

The truth of this statement becomes more apparent when, rather than looking to past examples of bad orders that were slow-rolled to good effect, one looks at a potential policy decision whose consequences could be highly controversial but are by no means predictable.
...The question of how to dissent is not an easy one. Nevertheless, the military professional must exercise his moral autonomy when confronted by a dilemma. He cannot morally justify his subsequent decision on the basis that he was simply obeying orders, that he put up token resistance prior to obeying, or that he dragged his feet in execution.
The topic of military dissent raises issues of fundamental importance to the profession of arms. When faced with a moral dilemma, the military officer not only has grounds for dissent, but also, if his code of ethics and oath of office so guide, has a duty to disobey. He is obligated to exercise moral autonomy, and in so doing must use his professional ethics to guide him down a path that is by no means clearly defined...
A tip of the hat to www.navaleadership.blogspot.com for bringing the article to our attention.
Posted by Mike Lambert at 4:18 AM

At the end of his commentary Milburn brought up a hypothetical where an officer might be tempted to slow-roll orders to repeal DADT. This lead me to wonder under what circumstances would an officer be justified to disobey an order where that order conflicted with his personal convictions, but was nonetheless not only legal but very arguably moral and very arguably the "right thing to do?" This obviously is not a case where Reasonable Military Offices who are presented with the same situation would arrive at the same or nearly the same answer, such as, perhaps, de-Bathification.