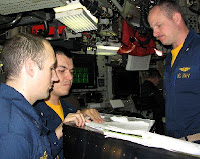 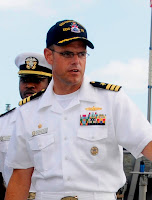 RMKS/1. I AM PLEASED TO ANNOUNCE CDR MICHAEL A. MCCARTNEY (left), FROM THE PACIFIC FLEET, AND CDR JEFFREY M. GRIMES (right), FROM FLEET FORCES COMMAND, ARE THE 2010 RECIPIENTS OF THE VADM JAMES BOND STOCKDALE AWARD FOR INSPIRATIONAL LEADERSHIP. CDR MCCARTNEY WAS SELECTED FOR HIS PERFORMANCE AS COMMANDING OFFICER, USS CHUNG-HOON (DDG 93) AND CDR GRIMES FOR HIS PERFORMANCE AS COMMANDING OFFICER, USS MARYLAND (SSBN 738) (GOLD).

2. THIS FLEET AWARD WAS ESTABLISHED IN HONOR OF VADM JAMES BOND STOCKDALE WHOSE DISTINGUISHED NAVAL CAREER SYMBOLIZED THE HIGHEST STANDARDS OF EXCELLENCE IN BOTH PERSONAL EXAMPLE AND LEADERSHIP. THE AWARD IS PRESENTED ANNUALLY TO TWO COMMISSIONED OFFICERS ON ACTIVE DUTY BELOW THE GRADE OF CAPTAIN WHO ARE IN COMMAND OF A SINGLE SHIP, SUBMARINE, OR AVIATION SQUADRON, SEAL TEAM (OR NAVAL SPECIAL WARFARE SQUADRON) OR SEAL DELIVERY VEHICLE TEAM, SPECIAL BOAT TEAM, EXPLOSIVE ORDNANCE DISPOSAL MOBILE UNIT, MOBILE DIVING AND SALVAGE UNIT, OR NAVY SPECIAL CLEARANCE TEAM DURING THE NOMINATION CYCLE. CANDIDATES ARE NOMINATED BY PEERS WHO THEMSELVES MUST BE ELIGIBLE FOR THE AWARD.

3. THE 2010 WINNERS WERE CHOSEN FROM AMONG NINE OUTSTANDING FINALISTS IN A REVIEW PROCESS THAT INCLUDED SCREENING AT THE FLEET COMMANDER LEVEL AND FINAL SELECTION BY A BOARD OF SENIOR OFFICERS.

5. CDR MCCARTNEY AND CDR GRIMES, AS WELL AS ALL NOMINEES, SHOULD BE JUSTIFIABLY PROUD OF THEIR ACHIEVEMENTS.

6. AWARDS WILL BE PRESENTED IN NOVEMBER 2010.
7. RELEASED BY ADMIRAL G. ROUGHEAD, CHIEF OF NAVAL OPERATIONS.//

My story about the Vice Admiral James Bond Stockdale Inspirational Leadership Award Winners is HERE. I was very pleased to be able to add the names of these two fine leaders to my list of winners.
Posted by Mike Lambert at 7:22 AM

Surprised that they are not black, female, or both.

That is an interesting and thought-provoking comment. Nominees are peer selected. You have to be a CO to nominate a candidate. You only have one page to make your case and then the packages go to a board. I tried a FOIA request to get more information - the Navy would not provide it.

I would love to see the nominee list as well. The "Diversity Manifesto" is starting to become ridiculous to the point of reverse discrimination toward white males. Look at the 4 Sailors of the year. All Female and Ethnic. Things that make you go Hmmmmmm.

"He is truly the most effective CO I have observed," said Patrick, in his nomination letter, adding that McCartney's effectiveness stemmed from a commitment to productive training.

McCartney personally led Joint Professional Military Education-caliber lessons and case studies in leadership in the Chung-Hoon wardroom each week and sharpened bridge-watch efficiency with nightly maneuvering board problems, said Patrick. McCartney also ensured every officer assigned to Chung-Hoon earned an engineering officer of the watch letter and other qualifications.

Patrick described the Chung-Hoon as "the cleanest ship on the waterfront" and its crew as "exceedingly positive in outlook and exceptionally polite and mature."

Grimes reported aboard the Kings Bay, Ga.-based Maryland in 2007. Maryland received the 2008 and 2009 Commander, Submarine Squadron 20 "E" for battle efficiency and the 2008 Omaha Trophy for top performance among Trident submarines.

Grimes was chosen to mentor prospective commanding and executive officers as part of the Strategic Programs Prospective Commanding Officer/Executive Officer Course, and was nominated for the Stockdale Award by three fellow commanding officers, including Cmdr. Michael Katahara of the USS West Virginia (SSBN 736)(Blue Crew).

"A true team player, Cmdr. Grimes fosters a strong atmosphere of camaraderie and esprit de corps throughout the Kings Bay area," said Katahara, in his nomination letter. "A true mentor for peers and juniors alike, he has clearly displayed leadership which will establish a professional legacy in the submarine force for generations to come."