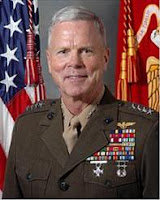 The Senate Armed Services Committee held confirmation hearings today, 21 September 2010, for General James F. Amos as the next Commandant of the United States Marine Corps.
In his prepared response to standard confirmation hearing questions, he provided the following information about his view of DADT as his response to advance policy questions.
What is your view of the current "Don't Ask, Don't Tell" (DADT) policy, and its impact on the Marine Corps?
General Amos: In my view, the current law (and associated policy) has been a reasonable compromise between the unique requirements of military service and the aspirations of qualified citizens who are interested in military service. I would characterize its impact on the Corps as being minor; about two tenths of one percent (.2%) of the roughly 626,000 Marines discharged since 1993 were released for reasons of homosexuality.

In your personal view, should the current policy be repealed? Why or why not?

General Amos: In my personal view, the current law and associated policy have supported the unique requirements of the Marine Corps, and thus I do not recommend its repeal. My primary concern with proposed repeal is the potential disruption to cohesion that may be caused by significant change during a period of extended combat operations. Furthermore, I’m concerned that a change now will serve as a distraction to Marines who are tightly focused at this point on combat operations in Afghanistan.

The Secretary of Defense has instituted a comprehensive review of the law and policy, and that review should tell us a lot about whether such a change will be disruptive to unit cohesion. The review will also provide insights into how, if the Congress approves of a change in law and the President signs it, the DoD should develop policy for its implementation.

The full text of his response to advance policy questions is HERE.
Posted by mike at 12:18 PM

Nice to see a service chief who has the nuts to honestly express his opinion and to stand by it. We could use 4 more men as service chiefs just like him. It seems Marines have a better sense of moral and physical courage than their contemporaries. Saw a note in the WAPO about USMC General Cartwright not respecting Admiral Mullen because Mike is not a warfighter. That sums it up for me.

I am an out gay firefighter, risking my life with straight firefighters. We sleep in the same room, night after night. We work closely together. My being gay has no effect on unit cohesion.

Well being a firefighter is different then being in combat. You may sleep in a room together but we may have to sleep in the same sleeping bag in certain situations. I'm in the military and I definitely agree it would affect unit cohesion. Wierd how the news always says the military supports the repeal of DADT yet everyone I talk to agrees we should keep it. Who's taking these surveys and why haven't I or anyone I know been given a chance to voice our concerns?