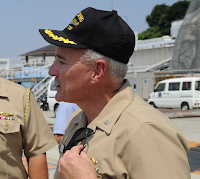 On Friday, Navy Captain Ronald Murray Gero was fired after an investigation into “improper personal behavior” which eroded morale and discipline. He was Commanding Officer of USS OHIO (Blue Crew) subordinate to Submarine Group 9 (SUBGRU9).

Gero was fired following Admiral's Mast with Rear Admiral James F. Caldwell, who commands Submarine Group 9 at Naval Base Kitsap-Bangor, Washington. He was fired following a "loss of confidence" investigation. In November, Captain Gero would have completed his command tour. He had been in command since November 2008.

USS OHIO, based at Puget Sound Naval Shipyard, was the Navy’s first trident ballistic-missile to convert to SSGN, which created space to house Navy Seals and other special operations forces and provided capacity to carry 150 tomahawk tactical land-attack cruise missiles.

Great post over at ANCHOR WATCH about "bearded-lady accountability".

This would have been his second succesful CO at sea tour. Right now the Navy his only letting successful prior served at sea O-6's who have been selected for major command to be SSGN skippers.

This CAPT was a very sharp guy, so it is sad that whatever happened for whatever reason he is no longer going to be able to help keep our nation safe at the tip of the spear.

I met Captain Gero 7 years ago. Was given a personal tour of another sub by him and it's skipper. Captain Gero is 100% dedicated to the Navy, it's traditions and his job as commander of a boat. He loves the Navy and it came through clearly. I found him to be magnanimous, highly energized and motivated about representing himself as a professional naval officer. I was glad to know that he was one of our sub commanders.

Superb officer. Incredible Commanding Officer. I don't know what he did. I hope the Navy has this right. We lost CONSIDERABLE capability at sea without him as CO of Ohio. I don't think it was worth firing him. Navy, you made a HUGE mistake with this one.

I served on Capt Gero during his first CO tour. Although I never went to sea with him (we were in the shipyard) I never saw anything that would indicate he couldn't do the job. Even more so, Capt Gero went on to be the PCO Instructor at Groton so he's trained dozens of other COs on the waterfront right now and tomorrows leaders of the Navy. For that reason, I think there needs to be more detail on his relief.

As an enlisted E5 during his previous Sub CO tour, I can say I don't agree with the other comments. While he is a motivated, dedicated officer (to visitors and other senior officers), he was not a CO I could trust and have faith in at sea. He was CO of a drydock boat, not an operational boat.

Seems the Navy is finally starting to take a look and see that "Ring Knockers" should NOT make Captain "...as long as we don't pee on the Admiral's golf shoes."

During my time as an Airborne Electronic Warfare Officer (1973-1982) I saw officers who were leaders, responsible, decisive, intelligent and caring booted simply because they were not Annapolis grads, while "Ring Knockers" universally hated by peers and subordinates who would NOT make decisions, would NOT take responsibility, and were apparently borderline mentally challenged ranked "Top 1%" even when they did not meet minimum "mandatory" quals.

The upper ranks in the Navy continue to be a fraternity with almost 90% of all Admirals wearing that damned ring. Apparently, though, the standards for that group have now been lowered so much that even the fraternity can't protect them all.

As the mother of my last CO at VAQ-33 once told me, "Before he went to the Academy he was such a nice boy...now he's such an ass."

He still had to pass PCO school and be selected for CO based on his performance as an XO at sea. He then went on to be a PCOI which means he was good enough for the Navy to let him teach and evaluate PCOs on deployed at sea submarines for about two years. The Navy will not allow mediocore post COs do this job. Let's not get excited about the dry dock portion of his first CO tour as it is a tough job in it's own right. Just ask the numerous COs that were fired during past drydock tenure.

Think I served with CAPT Gero back in the 70's on the USS JAMES MADISON. We were both enlisted guys at the time, Gero being a nuke. We received our enlisted dolphins together with two other guys at Prestwick Airport Scotland in March 1978. He was a "hot runner" back then and went on to the NR1 after the Madison I believe.

MadDog
Get your facts straight and engage your brain before opening mouth (or typing). Gero was not a ring knocker, he did not go to the USNA. Not sure what your beef is, maybe got passed over for O-4 and forced out? Regardless, there is a greater percentage of Academy grads that stay for the long haul, putting in over 30 years. Might that be why the Flag ranks seem to have '90%' of grads? I was enlisted for three years, went to the Academy and served under CAPT Gero during his first CO tour. Excellent leader and knew everything there is to know about submarines. It is too bad that his personal life decisions might not be that 'great.'

maddog - your comments have nothing to do with rmgero. he went to auburn. you're on bingo fuel.

I was on the boat (still am) when this happened and I know that the crew did not like him. I know he was caught by a YN who was screening his mail. He received a letter from his mistress while on the boat. The YN was doing his job and realized what they had discovered and itwent down hill from there for Gero. it seems he went as far as to set up "meetings" (using government funds) in Hawaiiw here he would meet her.

I served under Gero on the Buffalo (dry dock sub mentioned before). I can affirm he was an ass. He was on a drug witch hunt and would piss test us twice a week. There were several people discharged from his command who never failed a drug test. We lost several really good people. It cracks me up that he was fired. It feels like a little bit of justice for the people wrongfully treated under his command.