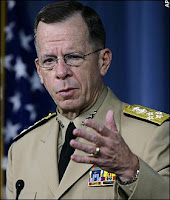 Tough Decision
The hardest decision? I think the most difficult decisions I’ve had to make are when I have had to relieve (fire) terrific people who have shown in their professional ability an inability to do what I expected of them. And in some cases, particularly, where they have made a major mistake from which personally they can recover but in the command in which I find – or we find ourselves, they – it’s my judgment that they leave.

And I also believe – and this is not a strength of many people – that when people are – when they’re performance is not matching up – and I try to do this, I’ve done this a long time. I look them in the eye, and I say it’s not matching up. People want to – they want to know where they stand, even if they’re not – even if it’s not what they think. And the worst thing we can do is lead them along thinking everything is okay. And then at the end of an evaluation period, crush them. They need to know early what they have to do to improve their performance.

So I think that in general, the hardest decisions I’ve ever had (to make) involve people.

Student: You spoke of several failures in your career and that through perseverance you’ve pulled yourself up from them, and I think that’s an important quality in a leader. Can you name one of those specific failures and how you did that?

Admiral Mullen: Well, I indicated I loved the Navy because it gave me commands. It gave me three ships and two of them I bombed out of very badly, temporarily. The first one that I talked about – and as a young CO – a young lieutenant – you’re still Captain of the ship. So, you know, literally, the first time I got the ship underway, had a pretty bad incident and was written a piece of paper that would end my career – official, in-my-record piece of paper. And I worked for two years to get that piece of paper out – there are processes to do that – and then it took me 11 years to recover, professionally, from that time.

And then the other one was as a very senior officer command at the captain level, major, major ship and I failed a major inspection in front of the world on what was then the best ship in the Atlantic fleet. So publicly, pretty embarrassing, and I would not have survived that had I not had a couple of admirals who saw some potential there and decided not to end my career. So it was their mentorship – and then in both cases, I worked pretty hard to recover – learned the lessons because, as I indicated, it’s not that I failed as much as what did I learn and did I improve, and I worked pretty hard to do that.

Remarks by Adm. Mullen, Chairman of the Joint Chiefs of Staff at the National Youth Leadership Forum on National Security
Posted by mike at 3:34 AM

I guess it's a good thing he never had to suffer under the ZERO DEFECTS policy that he, himself uses on his subordinates. It sure must be nice to be king.