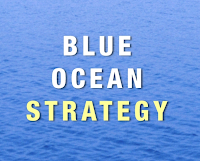 Never use competition as a benchmark – instead make it irrelevant by creating a leap in value for both Sailors and the Navy itself. We're not competing with the Intelligence or the Information Professional communities. Our contribution to the Navy and Joint mission is unique. The question becomes - HOW DO WE CREATE A LEAP IN VALUE FOR OUR SAILORS AND THE NAVY/JOINT WARFIGHTER SIMULTANEOUSLY ?
When the Information Warfare Community offers the Navy a leap in value, it will quickly earn brand buzz and a loyal following among Navy and Joint warfighters. We've seen a very DIRECT validation of this fact with our Army, Marine and SEAL brethren in Iraq. IWOs and CTs are delivering a product they can't get anywhere else. And that product is saving life and limb.

Blue ocean strategy rejects the fundamental tenet of conventional strategy: that a tradeoff exists between value and cost.
OPINION: With differentiation, we have done a good job by planning for and implementing the merger of CTA and CTO with other similar Navy ratings. We had lost our ability, over time, to sufficiently differentiate those ratings from their Navy counterpart ratings. We need to ensure that our other ratings CTM, CTI, CTT, CTR and CTN remain sufficiently differentiated from their Navy counterpart ratings. Similarly, differentiation of our Information Warfare Officers from their Intelligence officer and Information Professional officer counterparts will be critical to the future viability of the Information Warfare Officer community.
Posted by mike at 2:14 AM

This article makes some good points. To add on, it would seem some in leadership positions within the IW community have spent their tenures trying to apologize for not being Surface Warfare Officers and trying to portray themselves as IPs (network experts), which they were not. Some of our leadership seem to have some self-loathing going on. Having our community leader serve as the Executive Officer of the navy's communication command and having the IW effort tucked neatly in a corner is just dumb.
The article is absolutely correct in that navy IW officers and CTs of all flavors are more appreciated outside the navy than inside the navy. Army and Marine officers have seen the power of sigint in winning the war in Iraq. Meanwhile our Navy brethern have been steaming about trying to figure out what to do about a couple of third world "pirates". IW officers and enlisted CTs have been in the thick of the fight with other services and the SEALS (JSOC). There is a wealth of warfighting experience in our community stuffed under the leadership of the gang that brought us NMCI....