In my 38 years of service...Management fads 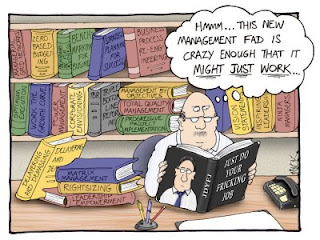 From the March USNI PROCEEDINGS Magazine

...I encountered numerous fads, and none, repeat none, ever made my unit or me more combat ready or my office or command more efficient in the use of taxpayer-supplied resources. Over the years we weathered MBO, TQL/TQM, Matrix Management, Process Re-engineering, Team-Based Management, Zero Defects, ISO 9000 and, now Lean Six Sigma. Each time the fad-of-the-day required dedicated trainers, time devoted to being trained, a report structure that clogged the paperwork flow, and more. Those of us in charge at the times these fads came along put up with them because it was suggested that if we didn't, careers would be limited. Thus arose gundecking, sissimulation, lip service, and snickers in the wardroom and ready rooms. The American Sailor, too, could readily see that and the secondary effects were everywhere, except for growth in efficiency.
((What should be done instead?))

...Apply a leadership formula, which has worked time and again over the years:

Ensure that the people in your organization know clearly what's expected of them.

Ensure they have the right training.

Provide them the right tools.

Then, cheer them on.

Do that, and dollars will be saved and the next management fad will be even more irrelevant and better ignored. That would be good for the Navy and all who serve in it.

FULL DISCLOSURE: When I was on active duty, I was an "early adopter" of these management fads and every other Navy policy. I thought it was my responsibility to implement these programs and policies as a Naval officer. Little did I know that, even among the most senior leaders of the Navy, there was great resistance to implementing these fads, programs and policies. It's nice to see VADM Dunn point out his own opposition to these things although he "put up with them" so his career would not be 'limited'.
Posted by mike at 6:40 AM

AMEN!!!!!!!!!!!!!!!!!!
I always thought those who rammed those silly management books down our throats were sorry leaders and knew it. They were looking for a cookbook solution to leadership in the absence of any natural leadership skills or inclination.

Agreed sir. We were forced to drink the kool-aid and promote it as well despite "paradigm burnout". Kinda hitting that cylinder now with the whole "managing diversity" thing, which is a non-issue to the real navy.
One of my CO's had the best, simplest command philosophy (even though he was not my favorite CO): 1) Know your job, 2) Take care of your people, 3) Make good decisions. Never forgot that one.
Aloha, RH