12th Anniversary of my failure to screen for command - while in command !! 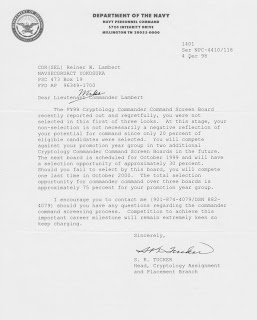 As a Lieutenant Commander, I assumed command of Naval Security Group Activity Yokosuka, Japan (a Commander command) in January 1997 from LCDR Eric Newhouse (the interim CO). The CO previous to Eric had been relieved 6 months earlier, after failing two successive Inspector General inspections - leaving behind demoralized Sailors and a fractured command.
The "Failure to Screen for Command" letter arrived after I had been in command for 23 months and a few days before I put on Commander. Twelve years later, it still leaves a bitter taste in my mouth - as you can tell.
I was not completely surprised by the letter because a Lieutenant from BUPERS had called two weeks earlier to inform me that I had "FAILED TO SCREEN FOR COMMAND". What did surprise me was the fact that I had failed to screen for command - a job that I had held for two years, already.
Thankfully, I didn't lose my day job. I post this letter for those who have had to deal with the pain of "Failure of Selection" - whether it be for promotion, command or some other program you desperately want. It's a very painful and emotional thing. One which we try very hard to comprehend. No one ever explained how I failed to screen for a job I already had and was ranked #1 at. A year later, I "successfully screened" for the assignment that I had been doing for 35 months.
Posted by Mike Lambert at 5:23 AM

Failed to screen for command and then failed in command. That can't be good for your career.

Sir, that whole thing is a computer glitch. Someone isn't checking facts & stats and is relying solely on what the puter decides to regurgitate. The upper half whom I serve tells a similar story (at dinner parties) when she was two days away from being pinned as an 06. She was in command of a weapons station in the Pacific N.W. and received a letter like yours a few years ago.

Personally I think it's funny. I'm happy to see an officer advance and be successful, but what is it with the screening board/personnel always screwing up like this? I've seen 03s and 04s scared shitless when receiving a such a letter when they had prior knowledge they were to move on to their next duty station to take command.

That's exactly why you always have to watch your paper work. If something is d**ked up or out of order, then bring the verification and have the Yeoman fix it. If not, the shortsightedness of your paperwork or file could conceivably kill you.

Capt, there seems to be some misunderstanding amongst us and I'd like to clarify: As I read this, you were in command due to your CO being relieved (essentially an acting, non-screened CO). You were up for CO screen at the time. You then FOS'd while in the acting CO billet (and commanding your unit successfully for nearly two years). Is all this correct, or am I misunderstanding the post? If so, then it is neither a "failed in command" or a "computer glitch" - it's a fault of the system, which did not select an obviously deserving and proven leader.
v/r
RH

I assumed command (not acting) in January 1997 of NSGA Yokosuka. Later, I was screened for command and failed to be among the 30% in my Year Group to be selected for command. It wasn't a glitch. The board did not select me for command. I did screen for command on my second opportunity. It was just odd to be in command (basically early) and fail to screen for the job that I was already doing. It was a painful process.

You should have sent a Letter back to the Crypto-head thanking him for the timely notification of not being screened along with a blurb about "redoubling your efforts in your current assignment to enhance your performance for the next years screening."
It should have been on Command Letterhead and signed as Commanding Officer, NSGA Yokosuka.

The irony of you boss having a letter from a CO acknowledging not having been screened for command would have been pretty humorous. Maybe enough that he could have raised the question to the board with a WTF???

You are right. I missed a great opportunity to do that. I would think the detailer writing me would have seen the irony for himself. "Dear Commanding Officer,
You did not screen for Command." I think it is a form letter sent to all those in my YG who failed to select. I wish I had a copy of one of the other letters.