Skipper in the spotlight 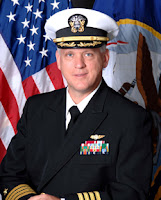 Graduating from the Pennsylvania State University in 1983 with a Bachelor of Science Degree in Aerospace Engineering, Captain Johnston received his commission as an officer in the U.S. Navy and was designated as a Cryptologic Officer (1610). He subsequently graduated from the Defense Language Institute (Russian language) and was assigned as the Operations Officer at the U.S. Naval Security Group Activity at Hellenikon Air Force Base in Athens, Greece. He qualified as a Special Evaluator aboard EP-3 aircraft and accumulated over 800 flight hours in numerous operational missions throughout the Mediterranean. He also led operational deployment teams aboard the USS KING (DDG 41) and USS WAINWRIGHT (CG 28).

Captain Johnston graduated from the U.S. Naval Postgraduate School with a Masters Degree in Systems Technology (Space Systems Operations) in 1990. He subsequently reported to the U.S. Naval Research Laboratory as the Director of the Mission Support Facility for the CLASSIC WIZARD program. In 1995, he was assigned to lead over 200 personnel at the U.S. Naval Security Group Detachment in Diego Garcia. He then received orders to the Chief of Naval Operations, Space, Communications and Electronic Warfare, Washington, DC, as an officer in the Tactical Exploitation of National Capabilities (TENCAP) office.

Captain Johnston received orders to the U.S. Fifth Fleet in Bahrain in 1998, where he served as the collections manager in the intelligence department. He was then assigned to the Commander of the U.S. Pacific Command at Camp Smith, HI, where he led the branch responsible for intelligence collection and information operations support. In 2002, he transferred to the Naval Information Warfare Activity at Fort George G. Meade, MD. There he served as the Technology Department Head as well as technology lead for the U.S. Naval Security Group Command. After being promoted to Captain, he was assigned as a special assistant to the Director of Communication Networks (N6) on the staff of the Chief of Naval Operations.