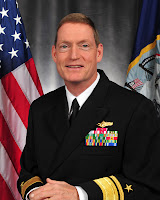 Rear Admiral Deets is a native of Charlottesville, Va. He graduated from Duke University in 1979 where he was commissioned an ensign via the Naval Reserve Officer Training Corps.
Deets began his information warfare officer career at the Naval Security Group Activity Kunia, Hawaii. There he served as a direct support officer aboard a variety of ships in the Western Pacific, Indian Ocean, North Arabian Sea, and the Mediterranean.
His next tour was at the Naval Security Group Activity Pyongtaek, Republic of Korea, as the executive officer. From there, he was assigned to the staff of commander in chief, United States Atlantic Fleet.
In 1991, he reported to commander, Carrier Group 2 aboard USS John F. Kennedy (CV 67) as the staff cryptologist. He deployed to the Mediterranean Sea and also participated in several counternarcotics operations on various ships. In 1993, he became the cryptologic junior officer detailer at the Bureau of Naval Personnel in Washington, D.C. Next, he spent two years on the staff of the U.S. 6th Fleet in Gaeta, Italy, as the command and control warfare officer. He also attended the National War College at Fort McNair, Washington, D.C., where he graduated with honors in 1998. He served a follow-on joint assignment as the executive assistant to the National Security Agency chief of staff.
Deets' personal awards include the Legion of Merit, the Defense Meritorious Service Medal, the Meritorious Service Medal with gold star, the Navy and Marine Corps Commendation Medal with two gold stars, the Army Commendation Medal, and the Navy and Marine Corps Achievement Medal. He holds a Master of Science degree in National Security Strategy with a concentration in Information Strategies.
Posted by Mike Lambert at 5:24 AM

I,too, served at NSGA Pyongtaek, but I suspect it was after his time there.

Oh, how I miss that duty station.

He was never a CO? Interesting tidbit.

He was CO of the Center for Cryptology, Corry Station.

This was deleted from his wikipedia bio:

He was initially in training to become a Naval Aviator.

In his only assignment as a Captain, Deets was the Commanding Officer of Naval Technical Training Center Corry Station]] in [[Pensacola, Florida|Pensacola]], [[Florida]] until 2004.

He was selected for Flag after having served only 2 years as a Captain.

I don't know why they don't list his command tour on his official Navy bio on the www.navy.mil site either. An oversight, I suppose.

Nice to see him wearing the information dominance warfare pin. Wasn't he a SWO before?