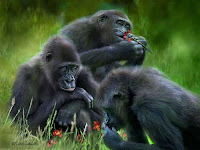 The three major warfare communities lord over the Navy like great apes, demanding loyalty and hoarding power. Only by overhauling the personnel system can we reduce their power and get everyone back in service of the Navy itself.
These warrior apes have admirable strengths: expertise in their craft, professionalism in their role, and huge devotion to their kind. But they also do the Navy harm: their internal interests overwhelm the Navy's broader interests, their single-mindedness impedes the Navy's larger mission, and their internal focus breeds loyalty that causes a profound under-imagination of the Navy's potential future.
Our officer personnel system is failing the Navy mission in many ways:
Let's tackle these personnel problems by starting with a single, unarguable premise: the officers of the Navy exist to serve the Navy. Not themselves. Not their particular kind of warrior ape. The Navy.
Excerpted from Captain John Byron's (USN, retired) third place essay - "THE GREAT APES" -  in USNI General Prize/Arleigh Burke Essay contest in 2005.  USNI members can read it online HERE.  Not a member?  Join HERE.
Posted by Mike Lambert at 5:55 AM

Corruption and parochialism in my own (URL) community motivated be to leave active duty after my second tour. My detailer told the three star who called on my behalf that I couldn't have the job for which I was the best qualified candidate because it was "reserved for one of the community's favorites". That guy was unsuitable, unqualifed, ended up being relieved, and I quit the Navy.