Taking Care of Our 'Veteran' Sailors 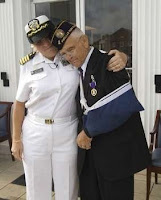 Lewis Hopkins hobbled down the steps, his left arm in a sling and decades-old shrapnel embedded throughout his 87-year-old body.

“Do you need some help?’’ someone asked.

“I don’t need no help,’’ he barked as he descended the stairs of the Quarterdeck building at Corry Station on Friday. “We whupped them at Midway, so I don’t need any help going down stairs.’’

Hopkins and seven other Battle of Midway veterans were honored Friday at Corry Station during a ceremony marking the 67th anniversary of the historic Battle of Midway, a turning point in World War II.

Photo is Captain Connie Frizzell (the first female and youngest Commanding Officer of the Center for Information Dominance at Corry Station - Pensacola, Florida) at the 67th Anniversary Commemoration of the Battle of Midway with Lewis Hopkins. Captain Frizzell is currently serving on the Joint Staff.