Digital Defense - We Use The Term "Probed" 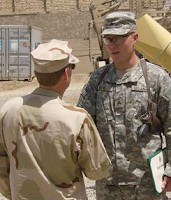 A command at Little Creek shows that information technology is just as important as aircraft carriers. The Navy fights it thousands of times an hour. Someone, somewhere, pokes at the outer layer of its classified computer networks, attempting to find a way in. “We use the term ‘probed,’ “ Rear Adm. Edward H. Deets III said. “Someone is actually interested in exploiting a vulnerability.”

RADM Deets is the No. 2 person in charge of the Navy’s Network Warfare Command. The Sailors there work tirelessly to keep those digital armored doors shut tight. They have to. Having “secure information flowing in real time that our commanders can be confident in” is critical, RADM Deets said. "Many of those commanders, he pointed out, are in Iraq and Afghanistan and on battlefields where the role of RADM Deets’ Sailors is now considered as important as that of a tank driver, a fighter pilot or an infantry officer.

So, does this command have access into NMCI? SIPRNET?

It seems everytime we turn around NNWC is pumping up NCDOC. Valid? or window dressing?

What about the siginters that are actually making a difference?

Another point... in spite of the navy fixation on ships, hackers and cyberattacks don't generally care about ships. The care about shore based higher headquarters (NMCI and SIPRNET) and the industry spies love systems commands and academia. Again, NMCI or their own special networks...