Sailor misconduct characterized as a 'disease' 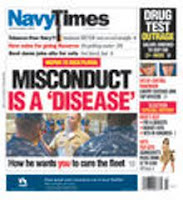 If it is in fact a disease, the Navy's cure all of punishing the whole for the acts of the few is not close to a remedy for curing misconduct.

Recalling the restrictions on personal liberty imposed during my time on the staff of the Commander, U.S. SEVENTH Fleet aboard USS BLUE RIDGE (LCC-19) , the entire crew and staff  (E-1 to O6) were governed by the identical restrictions after a number of liberty incidents.  In foreign ports we were not allowed to leave the ship alone.  Everyone on board had to depart with a 'buddy' and had to return to the ship with the same 'buddy'.  If your 'buddy' didn't want to return to the ship, you were stuck in town overnight.

None of this made sense to anyone and our favorite Marine on the staff confronted our well meaning Chief of Staff and said, "When you issued this directive, I was under the impression it applied to E-4 and below.  There is no way this could apply to an E5 or an O5, it just doesn't make sense."  The Chief of Staff assured the Colonel that the policy applied "across the board."  It was many months before the policy was eased.  I always left the ship with a buddy.  The Colonel always left the ship alone as a matter of principle.  I think the Chief of Staff was okay with that.

Don't punish the whole when you know who the 'at risk' individuals are.  Be sensible.  Imposing archaic and unreasonable rules on high performing Sailors just doesn't make sense.  Our leadership can do better than that.
Posted by Mike Lambert at 5:30 AM

FORGET ALL THIS SAILOR MISCONDUCT MIKE!

It is time for a General officer/Flag officer/SES personal and professional behavior standdown. By their numbers they are a much smaller population and are causing national and international problems, not to mention stealing from the national treasury.

DOD's weak statement - "Secretary Panetta insists that leaders within the Department of Defense exemplify both professional excellence and sound judgment. The secretary recognizes that the vast majority of senior officers in the military abide by the letter and spirit of our laws and regulations, and utilize sound judgment in their stewardship of taxpayer resources. The secretary is committed to ensuring that any improprieties or misconduct by senior officers are dealt with swiftly and appropriately."

I remember those days on the Staff. COS was Kemp, correct? We had to sign that page 13! I was a PCC and refused. He threatened to take me to the Admiral...and I stood my ground along with Paz. We never did sign the page.

Captain Kemp was the COS. You are a better man than I am. I was a LCDR and signed it. I still have it at home. I will use it as a photo on one of my upcoming posts about "leadership by Page 13."

Its been this way in the nuclear navy for awhile. The only acceptable responses for a screw up that ends in a critique are 'training failure' and 'lack of supervision'...ie its his supervisor's fault.

I understand why they issued the order because they have to appear to be doing something. However they never understand that it serves a purpose for a few weeks, but months or even years of it loses the effect it was supposed to have. Instead of a curfew they should call it "Reflection Period" or something along those lines.
What irratates me is the fact that they never hold the sailors accountable to what they have done. Why are they not brought to the bases in what ever country they are in and forced to apologize to us for all the inconvience they have caused the troops.
Not feasible what about holding them accountable under the UCMJ and giving them additional prison time under the UCMJ?
It's pretty sad that as a 40 year old LDO LT I have less freedom then when I was a 24 year old E-5.
Just the wistful ramblings of an old LDO.

"PCC" wasn't Chief - it was post command Commander. Doubt many CPOs would have taken on Kemp and his page 13. I kept my copy of the unsigned page 13 until my farewell party and then showed it on a slide and burned it right there in the submarine sanctuary!

LOL...didn't think so! But I still stood up to Kemp. Do you remember his wife, Ann, and her farewell party blooper?...PCC

Few probably are, Captain. Honestly, from this IWO's perspective, there are very few men and women that I've served beside or had in my division that live up to the high standards the Navy espouses. One can try to change things, to hold people accountable, but at some point that person realizes that the misconduct they're seeing and trying to eradicate isn't a disease, but rather
the status quo. See no evil, hear no evil, speak no evil, that seems to be the Navy way. And the emperor is wearing no clothes.

IT IS COMMANDER SEVENTH FLEET'S DESIRE TO ACT AT EVERY
OPPORTUNITY ON THE PREMISE THAT "SAILORS ARE OUR MOST VALUABLE
ASSETS." THE LIBERTY CARD PROGRAM TREATS ALL E4 AND JUNIOR SAILORS
AS IF THEY ARE EXPECTED TO ENGAGE IN MISCONDUCT - THIS OCCURS IN
ONLY A VERY SMALL MINORITY OF E4 AND JUNIOR SAILORS. THE DECISION
TO CANCEL THE LIBERTY CARD PROGRAM IS IN RECOGNITION THAT THE VAST
MAJORITY OF OUR SAILORS ARE OVERWHELMINGLY OUTSTANDING. IT ALSO
DEMONSTRATES MY TRUST IN THE ABILITY OF OUR OUTSTANDING LEADERSHIP
TO APPLY APPROPRIATE FOCUS THROUGH MENTORSHIP AND DISCIPLINE ON
THAT VERY SMALL MINORITY OF SAILORS WHO HAVE DIFFICULTY ADHERING
TO MINIMUM STANDARDS OF CONDUCT.

From a 12 October C7F message.

The disappointing aspect of this C7F debacle is how our leaders have allowed the liberty missteps of a few junior/young personnel impact strategic activities. The only reason draconian responses are now seen as necessary is because of previous strategic leadership failures.
Guess what? Criminal activity is going to happen. It always has and always will.* Sometimes they are perpetrated by Sailors and they are sometimes perpetrated by locals. It happens all the time and will happen again and again in every AOR. Unfortunately, our leaders have allowed these 'happenings' to rise to the very highest levels of concern. By kowtowing to the host nation's minor complaints we've exposed our weakness and hamstrung ourselves. They got us jumping on command now and have no reason to relent. Even if these measures solve all the liberty problems in the AOR, the host nation already knows that we'll whimper the next time they bark about some other minor problem (especially if it's sensational and prone to media exploitation).

Another fine example of punishing all for the actions of a few ;-( Hope this changes before we PCS to Yokosuka next summer.


U.S. forces personnel to buddy up for all off-base trips to curb misdeeds


All U.S. service members in Japan have been ordered not to leave base unless accompanied, particularly at night, under a new "Buddy Program" following a series of damaging misconduct cases.


The measure ordered by Lt. Gen. Salvatore Angelella, commander of United States Forces Japan, took effect Friday. In principle, it requires all U.S. military personnel stationed in the country to be accompanied by someone — such as a colleague or family member — whenever they leave base outside the recently imposed curfew from 11 p.m. to 5 a.m.

The Buddy Program, the latest initiative to improve discipline, covers around 40,000 U.S. service members in Japan. The specific details of the measure will be left to each base and facility to decide for the time being, including time frames, the official said Friday.

The U.S. military command in Japan is currently working out a comprehensive set of rules for the program and is scheduled to announce them in early December, the officer said.

The 11 p.m. to 5 p.m. curfew was imposed on all U.S. military personnel in response to the alleged rape of a Japanese woman by two U.S. Navy sailors in the city of Okinawa in October.

But the step failed to curb misbehavior, forcing the U.S. Navy to issue an order banning all its personnel in the country from drinking alcohol at night.

Angelella said Thursday that he intends to keep the nighttime curfew in place until he can be satisfied that "service members understand the implications of their actions."