From 9 years ago - our new Secretary of Defense 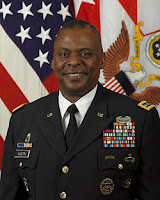 Lloyd J. Austin III of Mobile, Alabama can best be described as the Soldiers' General.  And some in the Navy are ready to call him the Sailors' General, as well.  He wasn't in charge long before he made it known that he was a team leader, ready to listen to all the Services with no parochial Army interests in mind.  In an age of extreme criticism of our general and flag officers, here's a guy who is so much less about being a GO (General Officer) and so much more about those he leads.  Talk to his 'troopers'.  He is a Troopers' General and those troopers are America's finest young men and women - men and women of the Army, Navy, Air Force and Marines.
Posted by Mike Lambert at 5:30 AM

So I'm curious. Why does he and the rest of his ilk think the entire white class of people are white supremacists and ultra-nationalists and need to be sat down and lectured about their madness and screamed at by racist dullards who make up the majority of those who instruct people about white privilege?

I am glad I don't work for those guys anymore. I had one class like that in 1989 and the black PO tried so hard to get us to admit our racism it was beyond funny. He introduced us to Seaman Tyrone Johnson and wanted us to right off admit that he 'sounded black', 'probably liked chicken and watermelons', etc.

I looked at him and said, 'wasn't Tyrone Powers a white dude?' Another LT said, 'yeah, didn't he fly as a Marine fighter pilot in WW2' and the class rapidly went downhill from there.

I really think if the leftist commies running our schools haven't eradicated racism, it will take somebody willing to shoot people and bury them in mass graves to end it. Starting out your term as minister of defense by calling 69% of the force racist is probably not a good way to start.