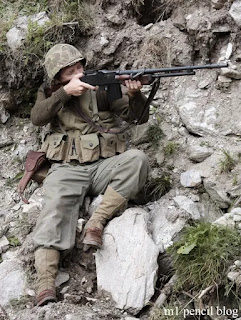 First, let me tell you that it is a true honor and privilege to be a part of this ceremony today.  I love the United States Marine Corps.  I love the Marines.  In fact, I am a proud member of the Marine Corps family.  For you to fully understand how I feel about TOP ROGERS, I have to tell you about another Marine.  50 years ago this month, my wife's Uncle Richard Roznowski shipped out from San Diego to Korea.  He was a private fresh from Recruit Training at Parris Island in South Carolina.  He was trained as a machine gunner.  In high school, he was a boxer and football player at St. Joseph's Catholic school in Green Bay, Wisconsin.  50 years ago during the Korean War, I think that it was every Catholic mother's secret wish that one of her sons would become a priest to ensure his ascent into heaven.  I'll tell you that at that time in our country’s history it was every father's wish that his son would become a Marine and raise some hell.  And that was no secret.

Richard spent less than one month in Korea.  In September of 1951, a Navy Chaplain and a Marine Corps Reserve Officer visited 1304 Guns Road in Bellevue, Wisconsin and delivered an American flag, a prayer book for Catholic servicemen, 3 medals including this Purple Heart and a letter from his Commanding Officer.  Richard was dead.  I cannot recount the grief of his mother Elouise, his father Bernard or his brother Jerry.  But, I don't doubt that Richard fulfilled both his parents' wishes - He certainly made it into heaven and he even raised some hell.

So, I ask each of you today to consider that words have meaning and actions have consequences.  Why do I tell you this?  Because you need to know that I am going to use some words to describe Top Rogers that have lost their meaning through overuse in our every day language.

I met Top Rogers nearly 10 years ago and I've followed his career with keen interest ever since.  He is the finest Marine I have ever been associated with in my 26 years of Naval service.  I have not said before this of any other Marine.  I will never say it again.  I do not mean to even remotely suggest to you that Top Rogers is a politically correct Marine.  He is not, was not, and never will be.  He speaks his mind freely to all who will listen, kind of like our Master Chief John Vincent. So, don't ask him what he thinks unless you really want to know.  Because, he will tell you.  And you, in all probability, will not like it.

He will tell you that his Marine Corps is not the place for social experiments.  You don't need to talk to Top about equal opportunity because he doesn't believe in hyphenated Marines.  There are no Black Marines, White Marines, Hispanic Marines, Asian Marines or even Catholic or Jewish Marines.  These men and women are United States Marines, straight up, tried and true.  They truly are THE FEW - THE PROUD.  They are his Marines and this has been his Marine Corps - America's most valued institution -- fundamentally unchanged in over 225 years.  I don' think we would want it any other way.  I don't think America could afford to have it any other way.

2 years ago, Marine Corps Commandant General Jones was satisfied that the Marine Corps was on the right track when he assumed command.  His first order to the Marines was "continue to march."

Top Rogers, as you conclude your career I say, "continue to march."

And I hope you make it into heaven because God knows you have raised enough hell.