Remembering the crew of COLUMBIA and their families 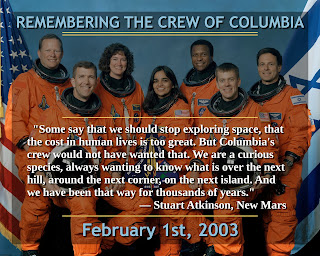 On February 1, 2003, Space Shuttle Columbia was destroyed in a disaster that claimed the lives of all seven of its crew.

While February 1 was an occasion for mourning, the efforts that ensued can be a source of national pride. NASA publicly and forthrightly informed the nation about the accident and all the associated information that became available. The Columbia Accident Investigation Board was established within two hours of the loss of signal from the returning spacecraft in accordance with procedures established by NASA following the Challenger accident 17 years earlier.

The crew members lost that morning were explorers in the finest tradition, and since then, everyone associated with the Accident Review Board has felt that we were laboring in their legacy.

When itʼs dark, the stars come out … The same is true with people. When the tragedies of life turn a bright day into a frightening night, Godʼs stars come out and these stars are families who say although we grieve deeply as do the families of Apollo 1 and Challenger before us, the bold exploration of space must go on. These stars are the leaders in Government and in NASA who will not let the vision die. These stars are the next generation of astronauts, who like the prophets of old said, “Here am I, send me.”

Thanks for the reminder Mike. With all the hoopla about the Super Bowl, I forgot about this tragic event that took place 11 years. May they all rest in eternal peace.

Willie and I were department heads together in VAQ-132...he was the Operations Officer and I was the Maintenance Officer. In many squadrons, those two officer billets run in opposition..."The OPS O wants to fly the jets but the MO wants to fix 'em" is the standard point of contention. With Willie, it was different. He was the most gentlemanly officer I ever had the privilege of serving with over the course of more than 30 years in the Navy. The world and the Navy lost a little bit of greatness and class on that tragic day.

Thanks very much for your personal remembrance of Willie. I have heard similar things from others. Thank you for taking the time to write it down.

Mike,
Admiral Hal Gehman chaired the investigation of the Columbia incident and the attack on USS COLE. He gave an excellent speech about those two investigations at the USNA a few years ago. The website is http://www.usna.edu/Ethics/publications/lectures.php

He presents a good discussion about large organizations lose sight of what is important and how they protect themselves when they feel threatened.