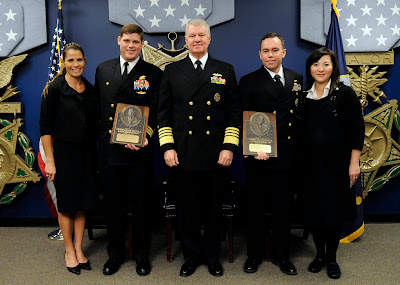 The 2008 winners of the VADM James Bond Stockdale Leadership Awards, Commanders Robert E. Smith and Paul J. Lyons, gave credit to their families and their subordinates. Admiral Gary Roughead presented the awards in the Pentagon's Hall of Heroes on Tuesday, 4 November 2008.

Smith commanded SEAL Team 2 and is the first SEAL to receive the Stockdale Award.

Smith led his SEALs in CENTCOM, South America and Africa. Lyons was the Commanding Officer of the forward-deployed destroyer USS STETHEM in Japan. Both men are known as "GO TO" men.

A League of Extraordinary Officers and Gentlemen - Article rejected by PROCEEDINGS magazine.