Don't get in the way - civilian control of the military 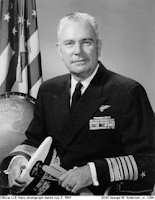 The dirty work fell to Deputy Defense Secretary Roswell Gilpatric. On Sunday afternoon he drove to the official quarters, atop Observatory Hill in northwest Washington, of the U.S. Chief of Naval Operations. There he informed Admiral George W. Anderson Jr. that he would not be reappointed when his present two-year term is up in August.

Anderson was stunned. So was most of the Navy. "A military man has really got to bow to this Kennedy crowd,'' said an admiral who is close to Anderson.

''Guys who get in their way get knocked off." And Anderson had been getting in the way of Defense Secretary Robert McNamara for quite a while.

The shift reminded the Pentagon once again that McNamara means to be in absolute charge. Once a decision is made, McNamara said recently, "by God, I expect everyone to fall in line. You can't run a military organization with divided authority."

From TIME MAGAZINE
Posted by mike at 1:23 AM

hmmmm:
perhaps the middle line of an unfinished haiku:

photo on left side
some text too, above, below
both tell their stories

:-)
'cause people don't play enough with haikus, here are some from the long faded 2007 baseball season:
http://punditry.org/blog1/2007/07/mid_season_baseball_haikus.html