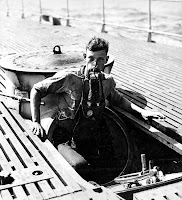 Charles Momsen had a problematic relationship with the U.S. Navy bureaucracy. As is often the case with bold innovations, Momsen encountered opposition from officials reluctant to develop new approaches to solving complex problems. Indeed, Momsen's innovative ideas and proposals frequently generated heated resistance from U.S. Navy organizations. As he reflected in retirement: "I guess during my career, I steered a course a bit too much my own... When an officer with initiative and imagination leaves the middle of the road, he's bound to have trouble...Often when I presented a new proposal, I was made to feel like a felon committing a crime and ended up not only having to defend the idea, but myself for daring to bring it up."
Vice Admiral Charles B. Momsen

From the book: Leadership Embodied, U.S. Naval Institute Press
Posted by mike at 6:58 AM