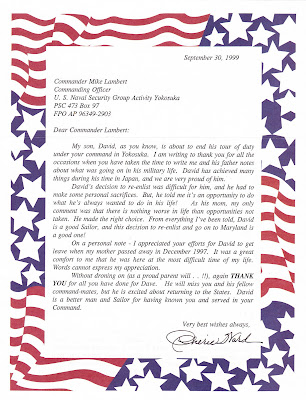 While in command of U.S. Naval Security Group Activity Yokosuka Japan, my Executive Officer (LT Bob Duncan) and I would meet at the command at 0630 or so each morning to spend 30-45 minutes hand writing letters to a different set of parents or relatives of our Sailors to let them know what 'their' Sailor was up to. One in 20 or so letters generated a response from a grateful parent or relative. The letter above is one such letter. The XO and I cared deeply about each of the 200 or so Sailors under our charge. Some of them understood and some didn't. Some came to that understanding later as they transferred to 'less caring' commands. Some still don't understand.

One of the most heart warming examples of the meaning of all this correspondence came on two separate occasions for my Command Master Chief - CTMCM(SW) Ronald N. Schwartz. In 2003 when he retired, his Mother and Father (Ron and Sandra) brought a notebook to his retirement ceremony (over which I presided) at Corry Station, Pensacola Florida (where he started his cryptologic career as a student). The notebook was filled with the letters I sent them regarding the Master Chief's many accomplishments helping me lead our Sailors. There were many letters and news articles sent as he accomplished a great deal. I was gratified to see his parents had kept every letter. In 2007, I saw those same letters in the same notebook in plastic liners at a far less joyous occasion when the Master Chief passed away tragically in an accident. Those letters meant so much to his parents because they reflected a detailed accounting of his very successful career history. His parents and I still exchange letters as I keep them informed of our efforts to keep his name and memory alive in the Navy.
Posted by Mike Lambert at 5:30 AM