Born this day in 1900 - Father of the nuclear Navy 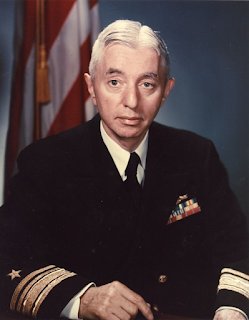 27 January 1900 – Hyman Rickover, American admiral the “Father of the Nuclear Navy” was born in Makow, Russia (now Poland). He emigrated to the United States with his family in 1906. He served on active duty with the United States Navy for more than 63 years, receiving exemptions from the mandatory retirement age due to his critical service in the building of the United States Navy’s nuclear surface and submarine force.He died at home in Arlington, Virginia, on July 8, 1986 and was buried in Section 5 at Arlington National Cemetery. His first wife, Ruth Masters Rickover (1903-1972) is buried with him and the name of his second wife, Eleanore A. Bednowicz Rickover, whom he met while she was serving as a Commander in the Navy Nurse Corps, is inscribed on his gravestone.
Posted by Mike Lambert at 5:30 AM