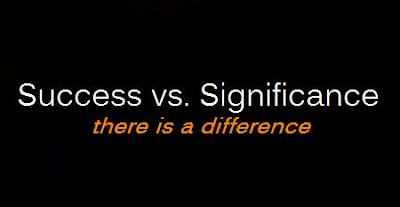 John Maxwell makes a good point about success versus significance.  The successful officer is adding value to his own career and the significant officer is adding value to the careers of others.  I was exchanging ideas with a fellow former CO a few days ago and we discussed "command tours" and measuring the success of our commanding officers.  Virtually every O5 command tour ends with the award of a Meritorious Service Medal and O6 command tours typically end with the award of the Legion of Merit.

What evaluation has really gone into the decision to award these significant medals?  Are all of these COs successful and equally so?  What is being rewarded?  Time in command?  Achievement?  Does it matter?  Is it our business?  Is it your business?

Apparently not too much, especially if every departing CO is earning one.  A recent award tightened my jaw a bit as the departing CO left behind a command in shambles.  The new CO would never admit to it, but he inherited a command in near total disarray.  The former CO left behind a dismal retention record, no record of mission achievement, >15% command PRT failure, no CPO selectees in the past three cycles and not one single accomplishment that his Sailors could point to with pride and say - "We did that!"

A journey from success to significance takes time.  It requires patience and commitment.  It doesn't happen by accident. You must be purposeful in adding value to the careers of your Sailors.  You are there as CO to accomplish the mission and to see to it that Sailors perform up to their potential.  If you have a bunch of Sailors with "unlimited potential", you're leaving a lot of potential on the deck-plates unrealized.  Strive for significance.  Your Sailors deserve your best effort.

Commander Sean Heritage has written about SUCCESS versus SIGNIFICANCE HERE.
Posted by Mike Lambert at 5:30 AM

Funny you bring up awards. Currently, awards are based primarily on rank and/or job, not performance. So if you happen to be an O-5, you get an MSM, whether you were awesome (and deserved a LOM) or sucked (and deserved nothing).

- 30% of folks don't get an award, since they are marking time and not going above/beyond.

- 60% of folks likely earned what is typical for their job/rank.

- 10% truly went above and deserve a higher award.

If you knew your boss thought this way, it'd likely push to succeed. We currently know the boss will write us up for an award commensurate with rank, so why does it surprise us that no one tries harder?

Captain,
Awards are a hot button issue so I will stay away from it but I think the problem is more along the lines of CO's failing to tell the truth.

No one has the courage anymore to actually write a FITREP/EVAl on a person that accurately reflects their performance. We would rather write a fitrep that is just weak enough for them to hopefully not get them promoted.

Witness what has happened to the Chiefs mess. We removed all the time requirements and now this once great brother hood has been filled with many substandard performers or people so junior that they are still trying to figure out what being a Chief Petty Officer means.

The same with the Officer community, CO's that don't know how to lead. The amount of CO's I would trust to lead me through combat and bring me back home is few and far between. Something as simple as writing a thank you message to a command that bent over backward adjusting the training schedule for you will be pushed aside so they can go on and impress the boss and move on up.

I believe the problem with everything can be boiled down to telling the truth on Awards, Fitreps and Evals. But in my opinion this is not going to happen anytime soon.

Ah, you should have seen the West coast MSOs during Earnest Will. The 4 ships abandoned by Group ONE in San Diego and San Francisco were totally gutted for over 2 years. You know its dire when everybody clamors to volunteer to go back to sweeping mines in the Persian Gulf. :)
I don't think we even bothered with the PRT and in the south we were exempt from all inspections as the crew sizes dwindled down to less than 20% present for duty. I saw some of the very best leaders the navy had and some of the very worst then.