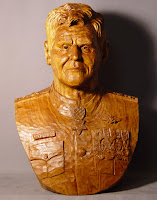 On 9 September 1965, Commander James Stockdale flew his 202nd and final combat mission over North Vietnam in an A-4 Skyhawk. What should have been a straightforward attack against a group of railroad cars south of Thanh Hoa turned into a seven-year odyssey that transformed this 40-year-old commander of Air Wing 16 into one of the U.S. Navy's most inspirational heroes.

Stockdale was born on 23 December 1923 in Abingdon, Ill., and graduated from the U.S. Naval Academy in 1946. Initially a surface officer on fast minesweepers, he transferred to aviation in 1949, earning his wings in 1950. Stockdale immediately proved to be a standout aviator.

The superb bust of Admiral Stockdale was carved by American patriot Master Chief Larry Nowell.   You can see more of his excellent work HERE.
Posted by Mike Lambert at 5:23 AM