Smartest person in the room 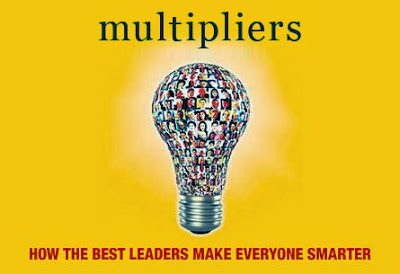 I met with a small group of IDC officers recently and one of my fellow Captains wanted to make sure all of us understood he was the smartest guy in the room.  It wasn't a declarative verbal statement. But, you readily understood his intent. He professed his sincere apologies for arriving late to our meeting.  It wasn't long before he made it known that his schedule was way overbooked and he really didn't even have time for the meeting we were currently involved in and he would have to depart early.  Thank goodness one of his Sailors brought him his coffee and he had time to take a few sips before he jaunted off for his next meeting for which he was already late.  Good thing he was a Captain and those 40 Sailors didn't mind waiting.  Quite the busy man.

I have a NEWS FLASH for you Captain (or anyone else for that matter).  Think you're the smartest person in the room?  More than likely you are not.
Posted by Mike Lambert at 5:30 AM

If you think you're the smartest person in the room, you are probably in the wrong room.

This post reminds me of our Harvard educated XO. Education doesn't mean smart.

I imagine he was also under the impression he was the most important person in the room. And I'm sure he was wrong on that count as well.

He could use a dose of humility.

I saw this a lot from those I thought of as the weakest leaders and the dimmest intellects. OTOH, I spent two full days in a course with an auditorium full of COs who were ordered to attend Level III Anti-Terror course. Not one of them, ranging from CVN skippers down to me was interrupted or disturbed during the course. I always thought that was kind of remarkable.

Oh, Hawaii, here we go again. Just let it be.

Or maybe there really is a problem in Hawaii.

Do a command climate survey and relieve as appropriate ...

"When leaders rely too heavily on their own intelligence, they can easily underutilize the full genius of their team. Their well-meaning attempts to lead can actually shut down ideas and cause others to hold back. People learn it's easier, and safer, to let the boss do the thinking. These leaders become "diminishers" of intelligence. "

"Oh, Hawaii, here we go again. Just let it be." That's what the Germans said when they came for the Jews.

Everyone is entitled to their style and I believe as leaders of sailors and within respective wardrooms, it's important for us to yield to and appreciate all styles.

You are as wrong as wrong can be. Captain Graf had a style all her own. Very much like our CO. One should not yield to that style. It caused too much damage to lives and mental health of Sailors.

I'd like to point out something a bit odd here and that is, many people flourished working for Graf. The implications are several: some people out-Graffed her. Some just put their heads down and got on with the business. Some just let her roll off their backs and carried on despite her.
Where in the world did we ever get the idea that the leader was everybody's friend and mentor?

You missed the memo. Everything changed in 2009. 360 degree feedback and all that.

I thought at first the title was "Smart Ass Person in the Room." That would definately apply to the CO of NIOC Hawaii. As one of his peers, he doesn't represent the vast majority of us who care about Sailors and their well being...or their families for that matter...

As an outside visitor to the command, I found the CO to be very personable and cordial. He has a superior attitude but that probably comes for his high position. His officers did seem to be uptight. I don't think that is any reason for particular concern.

With Skipper on vacation things have been better. Nice to have him off the island.

For all of you Anonymous commenters that think this is the place for your to air your hate and discontent regarding your CO and XO, shame on you! This is the worst form of cowardice. If you have an issue with your CO or XO there are ways to address them. It is called the Formal and Informal Resolution System; use them. Your Sailors read this blog. I am one of your Sailors. I am supposed to follow you, When you don't even have the courage to address your issues with the person that you have them with? The horrible CO and XO you all talk about, I have had multiple conversations with when there was something I didn't agree with and guess what, they have never held it against me. In fact, I believe it has worked in my favor. I understand that most of you Millenials were brought up with the "there are no losers" mentality and even 17th place gets a ribbon. Let me clue you in on something, in war second place is dead. You are in the military. Your job is to go and fight to the death if needed. If you can't take a few harsh words from someone trying to make you better, I hope you are never my Divo, Dept Head, or CO in a war zone. Bottom line - Grow up and start acting like the leaders you are supposed to be. If any of you would like to continue this conversation face to face like and adult instead of hiding behind an anonymous post, this is CTTCS Hartman, Ryan R. I am pretty sure you all know where I work at.

For the person who said that the CO of NIOC is a Peer. With all due respect, if you are truly his peer that means you are either a CO or a CAPT either way in my humble opinion you calling a "peer" a "smart ass" in a public forum for all persons to see is a serious lack of professionalism. If that is truly how you felt/feel and he is truly your peer, I humbly recommend you pick up the phone and call him and tell him so.

Senior Chief,
I think we had this conversation at the command. Will discuss again when CO returns fm Europe after New Years.

For our CO from CJCS "If you’re the most competent guy that has ever put a uniform on, but you don’t have character, I don’t really want you in my military.”