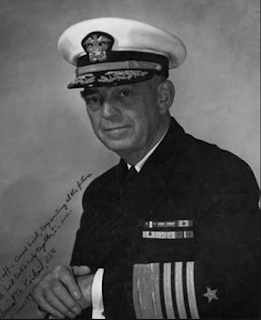 I have it on very good authority that officers, and especially those in the command triad, have carte blanch to conduct themselves as unethically as they please and without being held accountable. Perhaps because no one wants to sit in a glass house and throw rocks?

We have for example an active duty O6 that is still as active as can be despite having committed both adultery and fraternization. His admirals and other officers and their families are fully aware and yet he is active duty. Something is indeed rotten in the ranks and if I was a junior officer or enlisted personel that at anytime were held to any higher conduct than that I would be furious.

The problem lays with the cowards that are supposed to be the pillars in the military community and thus always enforce impeccable ethical conduct but are too political to raise the Bull Shit Flag when the top leaders in our military make assholes of themselves.

Have a lovely weekend!

Legally, naval officers are required by Title 10 US Code (Section §5947) to maintain exemplary conduct defined as...

“All commanding officers and others in authority in the naval service are required to show in themselves a good example of virtue, honor, patriotism, and subordination; to be vigilant in inspecting the conduct of all persons who are placed under their command; to guard against and suppress all dissolute and immoral practices, and to correct, according to the laws and regulations of the Navy, all persons who are guilty of them; and to take all necessary and proper measures, under the laws, regulations, and customs of the naval service, to promote and safeguard the morale, the physical well-being, and the general welfare of the officers and enlisted persons under their command or charge.”

All other aspects of social discourse have their place. In his book, A Sense of Values: American Marines in an Uncertain World, David Bowne Wood explains that it is the role of the military to defend society... not to define it.

It could be argued that the appropriate venue remains with the leadership provided by the civilian oversight of the military. Nonetheless, we would all do well to aspire and continually reach for higher standards. Even in failing we can, with grace and dignity, point the way for others.

Yeah, so was SECSTATE CLINTON who was investigated by the FBI in toto and not found guilty. You have raised a bar to the moon under which you demand all men to pass and you cavill at no ill behavior or bad men and yet you still insist that a vibrant and meaningless meritocracy exists among those who wear the cloth.