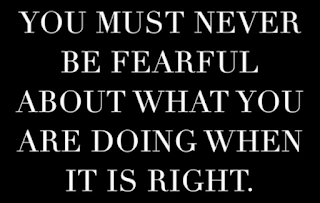 While those are fearful words, they allude that their is at least leadership. More fearful to me is the lack of any leadership in the CW community.

Lack of leadership anywhere = opportunity for those brave enough to seize it. The CW community is no different, if you feel as if there is no leadership - Lead!

@4:07, that sounds kind of mutinous but it seems to be a sign of the current academy where the administration and its officers cave in to every insane racist demand or stand willing to crucify any man for thought crimes committed only in the minds of their accusers. You can find an excellent reference in Wouk's, The Caine Mutiny. The junior officers there didn't "like" the leadership so they decided to impose their own. It's not a path I would recommend for anybody in the armed forces.

You would be amazed at the things juniors are ignorant of when it comes to the practice of leadership and it isn't really something that can be taught in a class or seminar.

The lack of leadership may also be a reference to failure at the organizational level. In that case, just stepping up to lead will not get the job done if the organization around you is toxic. You could even end up in a worse situation and at some point you take your talents elsewhere. I dont know what situation @6:23 is in, but the answer may not be just seize the opportunity and lead depending where they are located.

If the organization is toxic, even the best leaders have difficulty creating change. They are often seen more as a fly in the ointment than an answer to fixing what is broken.

Having retired from the Navy and still working in government service, I live in an environment such as this. What seems to add to my angst is the fact that it is an organization that serves prior military; however, my direct “leadership” is not prior service. Not that the Navy or the military, for that matter, is the end-all in the leadership category, but I learned some very salient things about leading people there, of which the people leading in this organization do not possess the first clue.

I am a small fish in a big toxic pond... as was said in an earlier post, it’s time to move on or die. Maturity helps in knowing that an over arching dysfunctional organization that does not want to change even when there is good leadership in its midst, won’t.