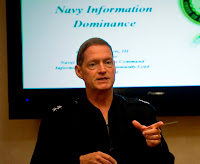 "I'm certain everyone participating in this joint conference understands the strategic imperative of diversity - ensuring our force is the best it can be and fully prepared to answer all bells," Deets said. "The strength of our great Navy is drawn from the rich diversity of our men and women, and our interaction this week builds on that strength."

The Navy has officially endorsed the Naval Officer Mentor Association via a Memorandum of Understanding signed on 25 June 2009. Originally formed to support Asian and Pacific Islanders, this organization is open to all races. You can become a mentor or mentee by joining HERE.

Admiral Roughead has said that he is “loath” for his diversity reviews “to turn into some kind of bureaucratic process.”
Posted by mike at 4:39 AM

Cynically I wonder if the Admiral mentors all of his officers and Sailors - or just those of diverse backggrounds at a public forum that gets reported on...

As a member of his staff at NNWC when he was deputy, I can attest that he mentored all of us without regard to civilian/military sex, race or religion. One does not become a RADM by discriminating. He is a selfless leader who is thoughtfully implementing the CNO's diversity policy - as ANY good leader would.

I hope someone is looking at the diversity of our SEAL teams and applying these same metrics. We want them to be the best they can be. Every team should have a Black, Hispanic, Asian, European and - a woman.

"He is a selfless leader who is thoughtfully implementing the CNO's diversity policy - as ANY good leader would." So, is RADM Deets also "interested in who are the diverse officers with high potential and what is the plan for their career progression"? Does he "...ask what is being done within to ensure they are considered for key follow on billets within the Navy"? Is his "list...held very closely but provide[s] ready reference to ensure we are carefully monitoring and supporting the careers of the best and the brightest the Navy has to offer"?

ANY good officer also questions things when they seem wrong. That's called "forceful backup"...something that CNO and CJCS talk a lot about, but don't like when it's directed at them.

Worthy comments all. I wonder how this discussion goes in NIOC wardrooms, if at all.

When did "mentee" enter the lexicon? Isn't the proper term "protege"? Since I recently saw this awkward term used in an article in the NWC review, I guess we've all accepted it. Anyhow I question how "incorporating diversity and mentorship into the enterprise" equates to weapons on target.
-RH

SORRY I WAS BORN WHITE! said...

In preparation for the annual Diversity Accountability Brief that I will be giving CNO next month, my N1 has put together the attached slides. The data, pulled from TWMS earlier this week, represents what is in the system but actual assignment of personnel in your XXXXXX may vary. Please review and submit changes as necessary.

A change in focus of this year's diversity brief is the desire to identify our key performers (by name) and provide insight on each of them. CNO is interested in who are the diverse officers with high potential and what is the plan for their career progression. He may ask what is being done within to ensure they are considered for key follow on billets within the Navy. This list must be held very closely but will provide ready reference to ensure we are carefully monitoring and supporting the careers of the best and the brightest the Navy has to offer.

Please review the data provided and report your concurrence or identify specific anomalies. Your insight to the diverse composition of your command will assist in my discussion with CNO. Additionally, provide your by name list including career insight for your top performers (03 and above) in those key positions. This reporting requirement will not be put into TV4 taskers due to the sensitive nature of the by name list. Input is due to me by 2 August 2010.

I have been stationed at 3 NIOCs in the last 5 years (As an E and an O) and we do talk about this stuff. I don't personally take it seriously. . .

Tired of all of it and I want to go home said...

In as much as Attorney General Holder stated "we are a nation of cowards" when it comes to honest discussion of racial issues, the Navy is a perfect reflection of the Nation. The Navy is a service filled with flag officer and captain cowards unwilling to address the diversity bandwagon mentality. Declare success, the Navy reflects the nation.

I remember Mr. Deets when he was my On-watch-Officer (circa 1981) at NSGA Kunia. I'm not surprised he has ascended to such heights. I remember him as very personable and cared about his crew.

I agree that the military is too PC. Ask the family of those killed during that Ft. Hood industrial accident!