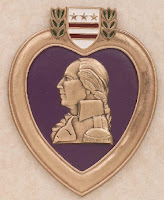 While on patrol, Windle’s unit surveyed a gap in a wall before passing, but as Windle passed through, he was shot just above the clavicle, knocking him down instantly. The unit’s corpsman responded immediately, using gauze to help stop the bleeding.

“When it happened, I did not know what was going on. I didn’t know where I was shot, or if it was serious," CTI1 Windle said. "It was an act of God, and I feel grateful to come through it as well as I did."

Since the Revolutionary War, the Purple Heart, the world's oldest military decoration in use, has been awarded to service members who have been wounded or killed during any action against an enemy of the United States.

NOTE: I have filed three separate requests (two under the Freedom of Information Act) with the Navy for a list of Cryptologic Technicians who have earned the Purple Heart in the Global War On Terror (Overseas Contingency Operations). The Navy (NNWC/OPNAV/Navy PAO) has yet to respond. If you are aware of a CT who has earned the Purple Heart, please leave me a comment.

NOTE 2: I received a note from Navy Safe Harbor - they don't maintain information on those wounded in combat. On 10 January 2010, I received a note from OPNAV stating that they are routing my request to another office for consideration.  (Update: on 20 October 2010 - 10 months after my initial request - still no answer from the Navy on the number of CTs awarded the Purple Heart in Iraq and Afghanistan).

An important post. Thanks for filing the FOIA request, Captain.

Navy Awards confirmed today that only 4 CTs have been awarded the Purple Heart. They could not confirm the names.

Thank you, sir. I'm honored to have served in a community with staunch patriots such as yourself. You do us proud.