A Genuine Officer and A Gentleman 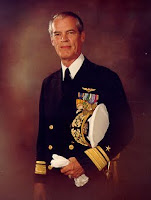 On this date in 1926, E.S. Ince Jr. was born to Eugene and Jay Green Ince. He is an only child. The love of his life, Jean Marion Gregory Ince passed on 12 January 2009. Theirs was a love story that lasted a lifetime. His proposal to Jean is truly legendary and their story has been featured in Gourmet Magazine and many others. They were married on 8 June 1949 in Oak Park, Illinois following his graduation from the United States Naval Academy-Annapolis, Maryland.

Admiral Ince was a Naval Aviator. During the Korean War, he deployed with VA-115 in USS PHILIPPINE SEA and USS KEARSARGE. He had 128 successful carrier 'traps'. Following the Korean War, he was a flight instructor. He attended the Naval Postgraduate School (Naval Intelligence) and the Defense Language Institute (Russian) in Monterey, California. In June 1960 he changed designators from 1310 (Naval Aviator) to 1610 (Special Duty- Cryptology). From 1966-1968, he was the Commanding Officer of NSGA Skaggs Island. He went on to become the Operations Officer (G50) for Naval Security Group Command and the Deputy OP944B at OPNAV.

He served as Commander, Naval Security Group Command from August 1978 to September 1980.
Posted by Mike Lambert at 4:53 PM

I read the story of his proposal in a Chinese magazine some 15 years ago, and it has never left me. Very sorry to hear about his wife's passing.