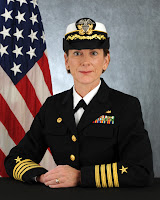 Capt. Susan K. Cervosky was selected for lateral transfer to the Information Warfare community in 2003 and was reassigned to Naval Network Warfare Command where she worked computer network defense initiatives. In May 2005, she reported as executive officer to the Navy Cyber Defense Operations Command (NCDOC). Next, she was the executive assistant to the Commander, Naval Network Warfare Command and most recently served as the Joint Forces Command J2 Chief of Staff from June 2010 until September 2011 prior to reporting to the Center for Information Dominance. Cerovsky became commanding officer of CID in October 2011.

The Center for Information Dominance, based at Corry Station, in Pensacola, Fla., is the Navy’s learning center that leads, manages and delivers Navy and joint force training in information operations, information warfare, information technology, cryptology and intelligence. The CID domain comprises nearly 1,300 military, civilian and contracted personnel; CID oversees the development and administration of more than 223 courses at four commands, two detachments and 16 learning sites throughout the United States and in Japan. CID provides training for approximately 24,000 members of the U.S. Armed Services and allied forces each year.
Her answers are available HERE in CHIPS Magazine.
Posted by mike at 5:05 AM